I recently spent a couple of days in Łódź (which due to the oddities of Polish orthography is pronounced woodge, hence, as seat of the Polish film industry, Holly-Łódź), mostly to commune with the memory of 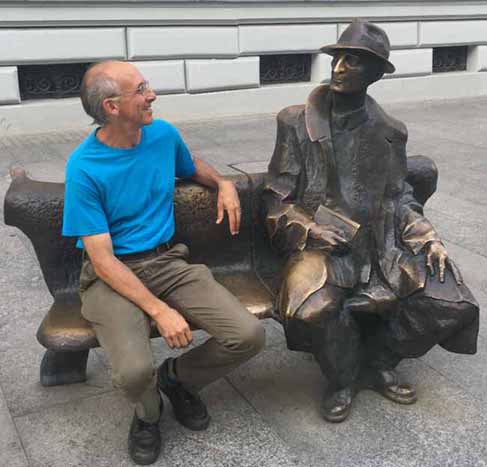 Julian Tuwim. Tuwim is a major figure in Polish literature, a poet, songwriter, and author whose songs and children’s poems are still apparently known to every Pole, but I came across him because of one piece that  – not accidentally – was left out of the official five-volume edition of his collected works.

It was an impassioned essay called, “We, Polish Jews,” first published in 1944 on the first anniversary of the Warsaw Ghetto uprising, in a Polish-language newspaper in New York, where Tuwim was then living in exile. (He described the city to a friend as “Łódź, but with elephantiasis.”) It was dedicated, “To my mother in Poland or her most beloved shade.” His mother had been shot in August 1942 during the extermination of the Otwock Ghetto, though I’m not clear whether he knew that when he wrote.

I ran across Tuwim’s essay a few months ago in Israel/Palestine, and have run across it a couple of times since. The section that caught my attention, and that tends to get quoted is about his Jewish identity. He wrote that he was a Jew because of “blood” – not, he immediately added, in the sense of race, but “Exactly the opposite.

“There are two kinds of blood: blood in the veins and blood from the veins. The first is a bodily fluid; therefore its study is properly the province of the physiologists. Whoever ascribes to this blood any special attributes and mysterious powers other than its organic ones in consequence, as we are now seeing, turns cities into ruins, slaughters millions of people, and ultimately, as we shall see, will bring down slaughter upon his own tribe.”

The other kind of blood was what the Nazis were spilling, “not blood concealed in the arteries but blood on display.” And, he wrote, it was that blood, “the blood of the Jews (not ‘Jewish blood’),” that made him write as a Jew.

I’ve found myself repeating that formulation in various conversations, because I am working on a project on immigration, nationalism and borders, and didn’t want to write simply as a white American defending the rights of people from the southern hemisphere. My mother was a refugee from Nazi Vienna, my father’s parents were immigrants from Central Europe. I grew up on those stories, and I’m tracing them now, which means I’m thinking a lot about my own family history, and about the history of Jews in Central Europe – and the diaspora from Central Europe – and about the question of what it means if I say I am Jewish, and what it means if someone else says that.

Re-reading Tuwim’s essay, I’m struck by my original focus on the part about being Jewish, and the extent to which other writers have highlighted the same sections and phrases. Because that is not how Tuwim starts his piece. He begins by addressing the question of why he claims the pronoun “WE” for both Jews and Poles, writing, “Jews, whom I have always assured that I am a Pole, ask it of me; and now Poles, for the majority of whom I am and will remain a Jew, will ask it of me.” And, he wrote, “Here is my answer for all of them: 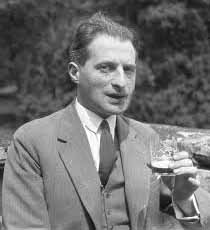 “I am a Pole because that’s how I like it. This is my completely private affair which I have no intention of explaining, clarifying, demonstrating or justifying to anyone. I do not divide Poles into ‘pure’ or ‘not pure,’ but leave that to the pure racists, to native and not native Hitlerites. I divide Poles, just as I do Jews and other peoples, into wise and stupid, polite and nasty, intelligent and dull, interesting and boring, injured and injuring, gentlemen and not gentlemen…”

But, in fact, he goes on to explain and clarify, after first noting: “To be a Pole…is neither an honor, nor a glory, nor a privilege. It is like breathing. I have not yet met a man who is proud that he breathes.

“A Pole—because I was born, grew up, matured and was educated in Poland; because in Poland I was happy and unhappy; because I want ultimately to return to Poland from exile even though heavenly delights were to be guaranteed me elsewhere….

“A Pole—because that is what I was called in Polish in my parents’ home; because from infancy I was nourished there on the Polish language; because my mother taught me Polish poetry and songs…; because that which became most important in my life—poetic creation—is unthinkable in any other language, no matter how fluently I might speak it….

“A Pole—because I have adopted from the Poles a certain number of their national vices. A Pole—because my hatred for Polish fascists is greater than for fascists of any other nationality. And I consider that a very important feature of my Polishness.

“But above all else… a Pole because that’s how I like it.”

When Tuwim’s essay first appeared, it got a lot of attention and was translated into numerous languages. Not all the attention was positive; in Palestine, Zionist critics took him to task for declaring his Jewish allegiance only now, under pressure, after decades of writing as a Pole. He had never denied his Jewish ancestry and indeed had regularly made reference to it and written poems attacking antisemitism. But he had also written poems satirizing traditional Jews: “Dark, cunning, bearded/ With demented eyes/ In which there is an eternal fear… People/ Who do not know what a fatherland is/Because they have lived everywhere.”  (This and other poems are translated in this article on Tuwim’s work.)

Today that criticism is often reversed, and Tuwim is taken to task for his naiveté about Poland—his passionate essay concludes with the prophesy that yellow stars will be adopted by the postwar Polish state as the highest badge of honor, pinned on the chests of military heroes, and that was not how things turned out. Poland continued and continues to be swept with waves of antisemitism, and in the years between the arrival of the Communist government and his death in 1953 Tuwim wrote very little and by some accounts was deeply depressed. But he lived those years in Poland and never seems to have considered leaving, and one of the main streets in the center of Łódź is called Tuwima, and his statue is on the city’s main pedestrian thoroughfare. 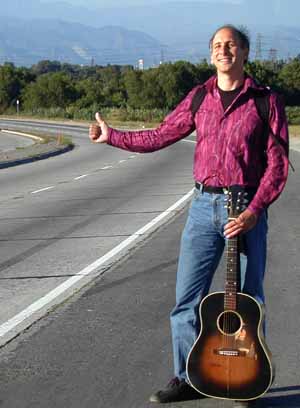 But some of the complications and messiness feel very familiar to me. As those of you who follow my Songobiography know, I have spent my life playing the folk and popular music of the United States. I’ve hitchhiked through all 48 contiguous states, and know the country well. It is my home and I feel very much part of it, for good and bad, better and worse. When a Polish friend who has been active in the klezmer revival here (and who is not Jewish) asked if I ever played or wrote about Jewish music, my response was, “Well… I’ve written a book about Bob Dylan.” Who is, I would note, the patron saint of what is now called Americana music. Take that however you choose.

I was recently in Frankfurt, going through an exhibit on possessions looted or otherwise acquired by local gentiles and institutions—including the museum holding the exhibition—from local Jews who were deported or exterminated, and I was struck by a descriptive panel early in the exhibition which referred to “religious Jews and those first turned into Jews by the Nazis.”

I had never before seen that framing of identity, but it immediately struck home, because that was essentially my mother’s story. Her family were Viennese socialists who dismissed religion as medieval superstition. I am not going to call them “assimilated,” because that word suggests they were somehow less Viennese than their socialist, atheist friends whose ancestors were Catholic. It is like the suggestion that someone in the United States who has one African and seven European great-grandparents is “passing” if she says she is European. It is letting the racists set the terms, and I won’t do that. I cannot deny the power or harm of the racist taxonomies, but I can point out that they are racist and refuse to use them.

My father grew up in Brooklyn, and was far more affected by antisemitism than my mother, the refugee from Nazi Vienna. For her, the racists were the Nazis. For him, they were the kids on his block. And, to make it messier, those kids weren’t unhyphenated Americans. They were all from families of recent immigrants, and when he went off to Washington Square College, he described the student body as “Jewish, Italian, Latin American, Greek, almost all Mediterraneans of one kind or another—and an occasional Christian blond, whom we tended to think of and speak of as the ‘white men’.” 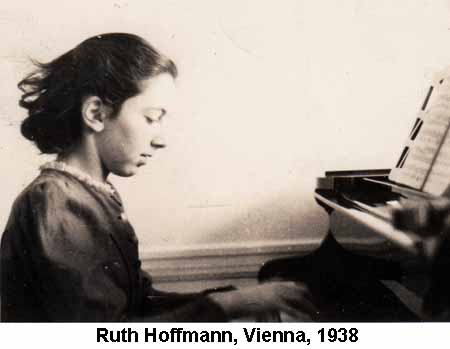 Meanwhile, my mother grew up thoroughly Viennese, daughter of two physicians, one of whom was also a concert-quality pianist, immersed in Mozart, Goethe, the earthy Viennese street dialect, and the certainty that she was at the cultural center of the universe. Her childhood foods weren’t latkes and gefilte fish; they were schnitzel, Kaiserschmarrn, and pastries slathered in whipped cream. When the Nazis labeled her a Jew, that changed the course of her life but didn’t change how she thought about herself. She felt rejected by Vienna and often referred to herself not as Viennese but as European, but her views remained thoroughly Viennese, and socialist, and atheist.

When I graduated high school, one of my college applications had a line asking my religion. Being less sure than my mother, I wrote “agnostic.” That was fine with her, but not with my father. He said, “That’s not what they’re asking,” and told the story of applying to the Brooklyn Athletic Club, responding to the question of religion by saying “atheist,” and having the young man behind the desk smirk and write, “Jew.”

So I’m here communing with the ghost of Julian Tuwim, who insisted he was Polish because he liked to be, and Jewish because Hitler was killing millions of Jews. That formulation bothers me, and makes sense to me. It’s not my formulation, and I have problems with a lot of what Tuwim wrote, both politically and aesthetically. But that essay suggested some different ways of framing these subjects, made me wrestle with some new questions, and helped me clarify my own thinking.

It also led me to study Tuwim’s life and work, which among other things suggested what his response would be to my disagreements: one of his most famous compositions is titled “A Poem Wherein the Author Politely but Firmly Requests a Multitude of Fellows to Kiss His Ass.” (There is a nice modern cabaret version — and yes, the list of “fellows,” includes both antisemites and Jews.)

And lastly… in case there aren’t already enough ironic notes in this story… the Lonely Planet guide cheerfully reports that there is a local custom of rubbing the nose of Tuvim’s statue for luck. The nose. 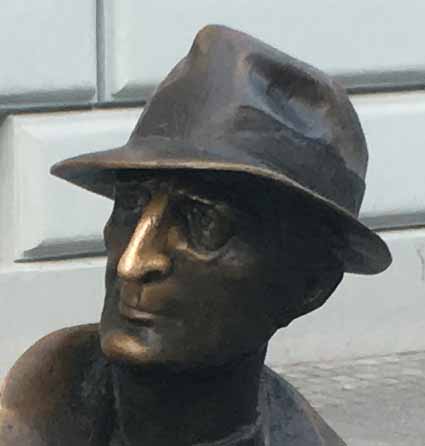