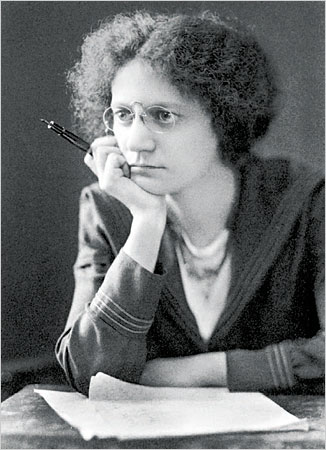 “What terms of entry may we impose on the immigrant without infringing on his inalienable rights, as defined in our national charter?” Mary Antin asked in 1914. Her answer:

Just such as we would impose on our own citizens if they proposed to move about the country in companies numbering thousands, with their families and portable belongings…. Whatever limits to our personal liberty we are ourselves willing to endure for the sake of the public welfare, we have a right to impose on the stranger from abroad; these, and no others.

Antin had become a best-selling author two years earlier with The Promised Land, a memoir of her migration to the United States from the Russian Pale of Settlement (the region to which Jews were restricted) in the 1890s. Written on the prompting of Josephine Lazarus — sister of Emma Lazarus, the poet who wrote the poem at the base of the Statue of Liberty — it is a charming book, exploring the experience of immigration and the way her understanding of the world shifted as her circumstances changed:

When I was a little girl, the world was divided into two parts; namely, Polotzk, the place where I lived, and a strange land called Russia. All the little girls I knew lived in Polotzk, with their fathers and mothers and friends. Russia was the place where one’s father went on business. It was so far off, and so many bad things happened there, that one’s mother and grandmother and grown-up aunts cried at the railroad station…

I learned, as I grew older, that much as Polotzk disliked to go to Russia, even more did Russia object to letting Polotzk come. People from Polotzk were sometimes turned back before they had finished their business, and often they were cruelly treated on the way…

Antin’s father often went away to Russia, and she writes that when he emigrated to the United States the word “America” meant little more to her than “Odessa.” She was ten years old when he left, and it was three more years before he could earn the money to bring his wife and daughters. Their journey through Russia and Germany gave Antin a sense of the bureaucratic traps and barriers faced by poor travelers, and her experience in the Boston public schools opened up a new world of possibilities. She had her first story published in English less than a year after arriving and her first book, From Plotzk to Boston,  in 1899, when she was eighteen. 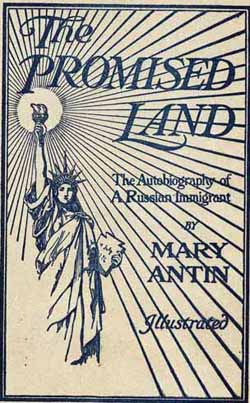 Antin was an ardent believer in the ideals exemplified by Lazarus’s poem and The Declaration of Independence,  and as an activist for women’s education and immigrant rights she fought to make her fellow citizens live up to them. When her memoir became a best-seller, she followed with a book-length polemic: They Who Knock at Our Gates: A Complete Gospel of Immigration.

Antin began this book by asking “a question of principle”: “Have we any right to regulate immigration?” Her response was that it was meaningful simply to ask that question, and that the answer should not be taken for granted. She then got down to particulars, concluding that some limits make sense for reasons of public health or safety, but only the sort that could equitably be placed on the movement of US citizens within the country:

Has, then, the newest arrival the same rights as the established citizen? According to the Declaration, yes; the same right to live, to move, to try his luck. More than this he does not claim at the gate of entrance; with less than this we are not authorized to put him off.

I have rarely heard that idea expressed in recent years, but in 1914 it was still relatively common. The concepts of rights and controls based on 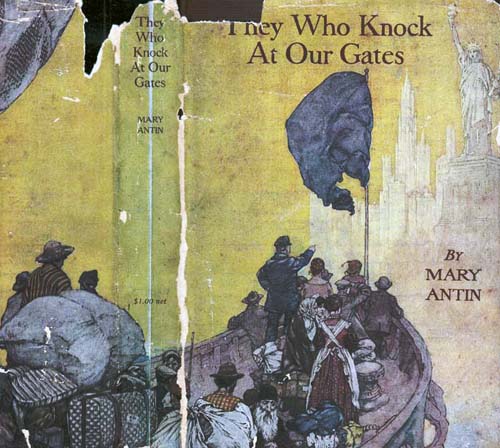 citizenship and solid nation-state borders were still in their infancy, and modern readers will find her next passage surprising:

Before World War I, people routinely crossed national and imperial borders without identification documents — hence all the stories of family names that were changed in the process. The crossings could be fraught: Antin’s family was stopped at the Russian-German border by an official who insisted they would have to upgrade their transatlantic ship tickets or pay a heavy indemnity, and it took a long day’s finagling before they made it through. But the modern world of passports and national identities was still being formed, and Antin was fighting not only to prevent the imposition of new limitations but the normalization of new ideas we now take for granted.

She had some notable blind spots: while staunchly defending the rights and virtues of Jews, Italians, Hungarians, and Greeks, she seemed unaware that Asians had been barred from entering the US either en masse or individually since 1882. She wrote a few passages about race that still resonate: 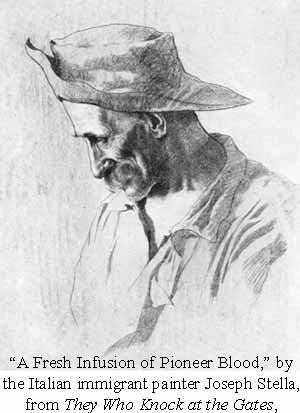 Some people see no indication of the future in the fact that race-blending has been going on here from the beginning of our history, because the elements we now get are said to differ from us more radically than the elements we assimilated in the past. To allay our anxiety on this point, we have only to remind ourselves that none of the great nations of Europe that present such a homogeneous front to-day arose from a single stock…

But what Antin meant by “different races” was the varied European stocks, with perhaps some leavening from the Middle East — none of her books mentions African Americans, and a contemporary reviewer in the African Methodist Episcopal Church Review described her memoir as “a paean of triumph not only of Mary Antin, but of the many other millions (provided they be not black) who have poured into the country from its foundation.”1

Antin did take note of the continent’s original inhabitants, writing that Anglo-American descendants of early settlers cannot “lay claim to the land on the ground of priority of occupation, as long as there is a red man left on the Indian reservations. If it comes to calling names, usurper is an uglier name than alien…” But that passage was directed at white nativists, and the Indians appeared only momentarily as a rhetorical flourish.

Antin was writing from a particular experience, in a particular time, and her limitations reinforce her central argument: Americans have never lived up to the ideals of universal equality or “life, liberty, and the pursuit of happiness,” but those phrases have nonetheless inspired generations of people around the world to try to make them a reality. Though they were written by a slaveholder who was not thinking of women when he wrote “men,” Antin was insisting they applied to her, and we can similarly assert the relevance of her arguments today. Her books are available on-line, as are tidbits like a newspaper

And, sad to say, much of what Antin wrote over a hundred years ago remains very relevant. When I hear anti-immigrant politicians argue that newcomers will take jobs away from American workers, and pro-immigrant politicians counter that we need immigrants “to do jobs Americans won’t do,” I recall another passage from They Who Knock at Our Gates:

Those who, like the labor-union lobbyists, point to the empty dinner-pails of American workingmen as a reason for keeping out foreign labor, are no more at fault than the lobbyists of the opposite side, who offer in support of the open-door policy statistics showing the need of rough laborers in various branches of our current material development. All of them are wrong in that they would treat our foreign brothers as pawns on the chessboard of our selfish needs.

Antin was an idealist, and if her prose was sometimes stilted, I still find her writing a valuable tonic. When she called the United States  her “Promised Land,” she did not excuse its failings, but neither would she relinquish that promise:

Show me a million American workingmen out of work, and I fail to see a justification for the exclusion of a million men from other lands who are also looking for a job…. Those who are teaching the American workingman to demand the protection of his job against legitimate alien competition are trampling out the embers of popular idealism, instead of fanning it into a blaze that should transfigure the life of the nation.