Most  people who oppose building a wall on the US-Mexico border think it is  unnecessary, harmful to wildlife, and sends a terrible, xenophobic message about what the United States has become. All of which is true, but also beside the point—which is that it will not have much effect on migration or drug trafficking, but will make Americans less aware and more frightened of the world outside. 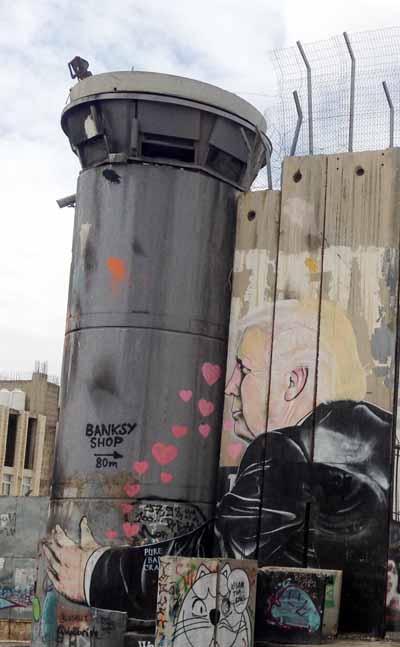 Indeed, I had heard so much about the wall as a hardship and barrier that I was startled when I got to the West Bank and found young men constantly telling stories of climbing over it—to visit friends and family, find jobs, or just go to a party or a concert. Many of them laughed and talked about it like a teenage rite of passage. Not all had made the trip themselves, but all had friends who had, and some had done it multiple times. “It just costs twenty dollars,” one told me. “You pay a guy, and he puts a ladder up on this side and throws a rope to climb down the other side.” Returning is no problem, because there are no controls in the other direction.

Of course, the wall does keep most Palestinians from crossing easily: families, older people, women, children—anyone who doesn’t want to climb a wall and take a chance on being arrested, who just wants to go shopping or take their kids to the beach or commute to work. And, of course, it’s a problem for anyone carrying luggage or goods, any drivers, ambulances, buses. The only people for whom it’s not a real problem are young, adventurous guys…

…which is to say, the only people for whom it’s not a problem are  the most likely  soldiers, fighters, or troublemakers.

The ease of wall-crossing is not just popular hearsay. Estimates of how many Palestinians enter Israel without going through official checkpoints vary, but all are impressively high—an LA Times story cites the Israeli state comptroller’s guess that “more than 50,000 Palestinian laborers… work in Israel illegally on a daily basis.” (It adds that along with climbing over the wall, many use drainage ditches to get under it or find unfinished or damaged sections.) 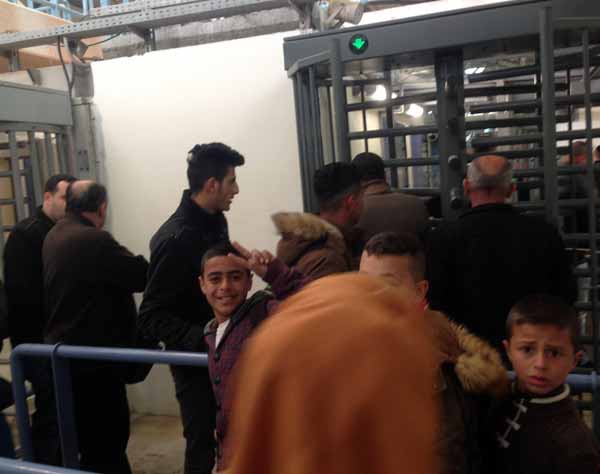 1 So much for the wall’s function as a “security fence”—the official Israeli term, and the function most Israeli Jews seem genuinely to think it serves.

I want to underline the genuine belief of Jewish Israelis—including those who describe themselves as liberal and sympathetic to the Palestinians—that the wall is protecting them from terrorist attacks. Even a lot of people who think the wall is harmful and counterproductive in the long term believe this. Excepting an exceptional few who have spent time on the West Bank—something most Israeli Jews believe is terribly dangerous—none I met had heard of young men crossing illegally by the thousands, or met Palestinians who talked about their adventures making that trip. Since Israeli Jews tend to be very knowledgeable about their country’s history and politics, and to think a lot about how they might possibly, eventually come to some kind of stable situation regarding the Palestinians, this at first surprised me. But then it occurred to me that I had not understood why the wall is there.

My revelation came on a bus from Ramallah to Bethlehem: leaving one city and entering the other, the wall was a towering cement barrier, two stories high. But out in the countryside it gave way to a much less imposing fence of razor wire punctuated with cameras 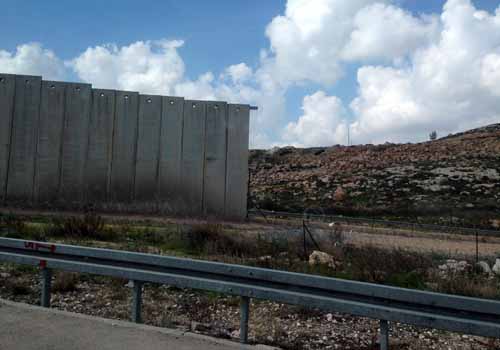 and motion sensors. Given all the stories of Palestinian climbers, I would not be surprised if these less imposing stretches are actually a more effective barrier—but the towering concrete wall is far more impressive, and it struck me that its massive ugliness is no accident. Its size and weight are a constant reminder to Israeli Jews of the horrors lurking on the other side, the enemies so fearsome that mere wire cannot keep them out. It is theater; theater of fear.

It is also a theater curtain, making the stage invisible to the audience. The media carry stories every day of confrontations, raids, attacks, and killings in the West Bank, and most Israeli Jews see only that news and the wall—so it is easy to think of the wall as protecting them from what is on the news, rather than from busy markets, crowded streets, children playing, people going to and from work, and all the normal bustle of normal Palestinian life.

This is not just a Middle Eastern story. Europe and the United States are being swept by a wave of what is broadly mischaracterized as “populism,” but more accurately is politics of fear. Leaders who have nothing positive to offer the mass of voters are relying on paranoia—deflecting worries about declining incomes and a deteriorating planet towards threats from the less fortunate, the foreign, the different. The standard name for this tactic is “divide and conquer,” 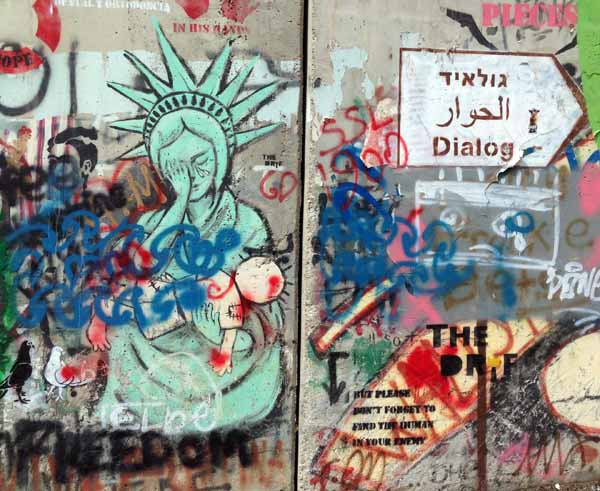 and what better way to divide than with a towering wall?

Opponents of the US-Mexico wall sometimes point out that it is less popular with voters who actually live near the border than with those further away, as if that was odd or ironic—but in fact, it’s normal. People in border towns are constantly interacting with people across the border, so know that they are people, not monsters. But suppose, instead of seeing people on the other side, one just sees a towering wall and terrifying news stories of the mayhem it hides?

Moving back and forth between Israel and the West Bank, it was astonishing how little Israeli Jews knew about daily life on the other side of the wall—I’ve written about some of that in previous posts, but the short version is that although I made no secret of being Jewish I met lots of nice people, made friends, and would strongly recommend that anyone interested in understanding the situation spend some time there. (And I keep specifying “Israeli Jews” because none of this is news to Israeli Muslims and Christians, many of whom cross to the West Bank regularly to shop, visit, or attend university.)

We live in a world of airplanes, drones, rockets, and mass communication. Walls do not protect anybody from serious threats, but they do prevent normal daily interactions—which is to say their function is not to protect us or make us feel safer; it is to increase ignorance and make us more frightened.

Yes, walls built by powerful countries make life somewhat more difficult for people trapped on the other side, but it is a mistake for citizens of those powerful countries who oppose the walls to focus only on the harm they do to others. Building a wall on the US-Mexico border will not actually have much effect on Mexicans or Central Americans, nor is it intended to. It is not a wall around Mexico—it is a wall around the United States. It is not primarily intended to keep “them” out; it is primarily intended to keep “us” ignorant and frightened.

That is the real terrorist threat: not the few fanatics who might potentially hurt some of us, but the powerful people on our side of the walls who want to control us all with a politics of fear. 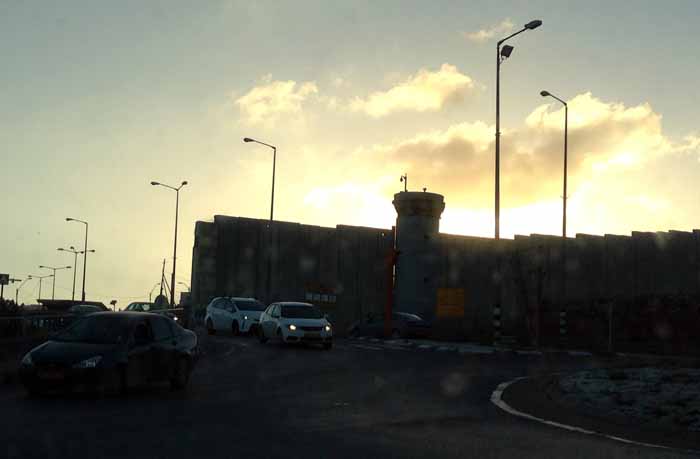