Over the last couple of years an average of two to three hundred migrants have left Honduras for the US every day. That means the caravan currently traveling north has no more people than normally make this trek every two or three weeks… the only difference is that normally they are prey for gangsters, robbers, and official thugs demanding bribes, while this time they are traveling in a large enough group to protect one another. 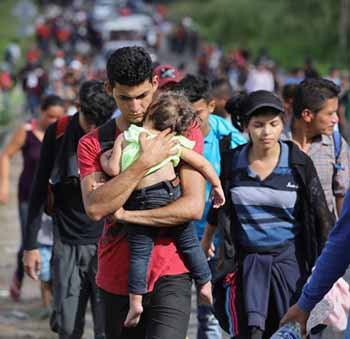 That was the original idea that drew people to travel as a caravan, and it remains the idea for the people involved. They set off this month because this is the best season to travel through Mexico, after the heat of summer and before the cold and rains of winter.

Whatever the political fallout in Honduras, Mexico, or the US, the people on the caravan are not marching to make a point. They are trying to get to a safer, better place, wherever it may be, and to avoid the dangers of making this journey alone — because all of them know how dangerous it normally is.

Anyone who thinks this is a conspiracy, whether of the right or of the left, is ignoring the basic reality that everything about this is normal, day-to-day news for anyone who is poor in Central America — all that is different this month is that some migrants are traveling in relative safety and other people are paying attention.

I have no problem figuring out which side I’m on.