I recently spent a quiet couple of days in Kruszyniany, a tiny town in northeastern Poland that is notable for having the country’s oldest functioning mosque… and thereby hangs a tale. Indeed, several tales. 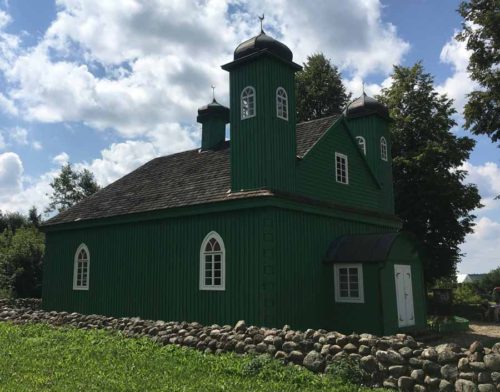 This particular mosque apparently dates from the 18th century, but the community that built it has been in the region since the mid-17th century. They are Tatars, descendants of the Golden Horde that reached Eastern Europe shortly after the death of Genghis Khan. Since I’m traveling here as part of a project on borders and migration, and in particular looking into my own family’s history, when I read about the Tatars I immediately wondered what happened to them during the Nazi occupation.

The short answer is not much – but the longer answer is complicated and interesting, because there was a lot of overlap between the Tatar and Jewish communities. In part that was simply because they lived in the same region, so necessarily overlapped with each other as they overlapped with Catholic and Eastern Orthodox Poles, Lithuanians, and everyone else who happened to be around. But because there weren’t many Tatars – at most around six thousand and by the 1930s more like half that – and Jewish and Muslim traditions share some important characteristics, Tatars turned to the much larger Jewish communities for some functions that in other parts of the world would have been managed by Muslims.

For example, Tatars tended to buy their meat from Jewish ritual butchers, whose methods of animal slaughter are similar to halal rules, and in some communities also had their sons circumcised by Jewish mohels operating under the supervision of an imam.

The shared practice of circumcision took on a new significance during the Nazi period, because the Nazis could expose Jewish men who were attempting to pass as Gentiles by examining their penises and some Jews in northeastern Poland attempted to pass this test by claiming to be Tatars. Holly Robertson Huffnagle, who has written a study of Tatar-Jewish relations, tells several stories of Jews who survived the Nazi period in this way, one making up a Tatar biography on the spur of the moment, others borrowing identity papers from Tatar friends or leaving their children with Tatar neighbors. 1

Of course, many more Jews survived by passing as Polish Christians or were hidden by Polish Christians – the Tatar community was limited to a small area of the northeast – and there were also some stories of personal clashes and of Tatars who worked with the Nazis. On the whole, though both Jews and Tatars recall regular, close, and friendly interactions before that period and Jewish refugees and survivors seem in general to recall the Tatars with particular affection. 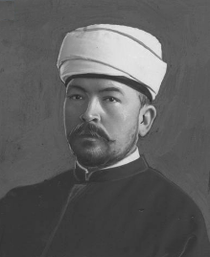 Robertson also writes that the Tatar Mufti of Poland, Jacob Szynkiewicz, helped protect the Karaite Jews by calling Goebbels to make the case that they were racially Turkic. I haven’t found corroboration of that particular story, but there is plenty of evidence that the Nazis considered the Karaim related to the Tatars both by ancestry and as communities that interacted on a regular basis – and therefore (except in a few notable instances) did not subject them to ghettoization or extermination. As a result, some Jews – meaning Ashkenazim – also managed to survive the holocaust by passing as Jews – meaning Karaim.

I hadn’t known about this quirk of the Nazi racial laws (though, once I started looking, there turns out to be a rich literature), and it underlines just how crazy those laws were. The Karaim were a clever bunch and had already gotten themselves exempted from Russian anti-Semitic laws and taxes by arguing that they were from a branch of Jews who had immigrated to the Crimea in the first century BC and hence had an alibi proving they were not around Jerusalem during the crucifixion. The Nazis didn’t much care about that, but crazy as it seems, many of them were extremely assiduous about establishing the details of their race theories.

That is something I’d never thought about, and it deserves some thought. I’ve just read a long paper by Kiril Feferman on the effort the Nazis put into determining whether or not the Karaim should be considered Jewish,2 and it was not just an arbitrary decision: they commissioned studies, consulted experts from several countries, debated the various opinions, and finally concluded that the Karaim, though practicing a Judaic faith based on the Torah, were practicing a different form of Judaic faith and were not racially Jewish – hence, were not Jews for purposes of extermination.

Feferman notes that this craziness included elements of realpolitik: the Nazis wanted to maintain good relations with the Turks and other Muslim powers, and the Tatars claimed the Karaim as allies, especially in the USSR, where both had a history of opposing the Bolsheviks. He notes that the Nazis also made exceptions for a few other “quasi-Jewish groups… such as the Georgian and Bukhara Jews in France and the Mountain Jews in the North Caucasus…” and by now my head is spinning.

So, getting back to the Tatars: the 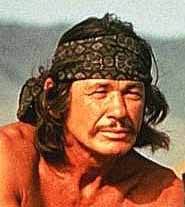 tour of the mosque in Kruszyniany was conducted entirely in Polish, so I understood virtually nothing, but I did catch the words, “Charles Bronson…Charles Buchinski.” I assumed the guide was claiming Bronson as a Tatar, so checked and found that yes, indeed, his father was apparently a Tatar from Lithuania, and this touch of Mongolian heritage presumably was what made him so easy to cast as a Native American…

…and while on that search I also learned that Rudolf Nureyev was a full Tatar and took pleasure in describing himself as a Mongol barbarian. 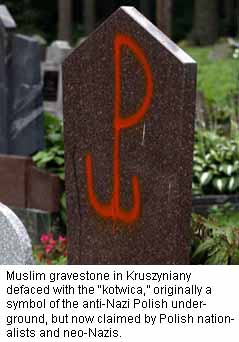 On a more serious note, the Tatars have recently been caught up in the anti-Muslim violence sweeping Europe. A mosque built by Tatars in Gdansk in the 1990s was firebombed in 2013, and in 2014 the historic mosque and cemetery I visited in Krusziniany were defaced with anti-Muslim slogans and a drawing of a pig. Which is ugly, and the ugliness is underlined by a story in the New York Times that quotes local Tatars blaming the violence on the influx of Muslim immigrants, which they see as raising justifiable concern among Poles that is causing friction where none existed before.

Of course that reminds me of the German and Austrian Jews in the interwar years who blamed rising antisemitism on the influx of Ostjuden – Jews from Eastern Europe – who were strange, poor, and whose arrival was regarded by many western European Jews as causing ill feeling towards proper Germans and Austrians who happened to be Jewish.

That story is usually told with the moral that the western Jews lacked solidarity with their eastern brethren and their punishment was to share a common fate. But I’m going with a different moral: racism and nationalism are sicknesses and discrimination doesn’t make anyone immune from them.  The Nazis viewed Poles as a lower species of humanity, fit only for menial labor – and why should German Jews have felt more solidarity with Polish Jews than German Christians felt with Polish Christians? One can argue that they were oppressed, so should feel sympathy with their co-religionists who were still more oppressed, and some did. But many felt that after centuries of discrimination they were finally becoming recognized as normal Germans and Austrians and the Ostjude were messing that up.

I’m not trying to provide answers, but I’m interested in the questions. Everything I’ve found about the relationship between Tatars and Jews frames that story around coexistence in a vanished past when people of different faiths were neighbors and got along with one another. That story is of course simplified, but the recollections seem honest and I’m sure they reflect real experiences in many communities and situations. I find it  appealing, both as a counterpart to the more familiar stories of Polish Christian antisemitism and as a reminder that Jews and Muslims throughout much of history have lived in overlapping communities and formed common alliances. But like all such stories, it is complicated. I’m on a long journey, and this is just one stop.