A short story: make of it what you will.

I was recently in Sanok, Poland, where they have the country’s largest skansen, an open-air museum of past lifestyles and architecture, like Plymouth Plantation or Colonial Williamsburg in the US… except that their romantic past is the turn of the twentieth century, when my grandparents were leaving this region for Vienna and New York.

skansen reflects the multi-cultural nature of rural Galicia in 1900, with sections showing the lifestyles of the Eastern Orthodox Boyks and Lemks, the Catholic (now often called “ethnic”) Poles… and a large wooden synagogue and two “Jewish” houses on the main square.

Unlike Plymouth or Williamsburg, these buildings are not staffed by people in period costume or demonstrating period crafts. At least on the day I visited, the guides were dressed normally in modern dress, with one exception…

The guide for the Jewish house had a long beard, wore a long black coat and hat, and had a character name-tag: Aaron.

He spoke some English, and enthusiastically showed us around: the bedroom, for example, where he pointed out the curling iron for shaping the men’s peyos and the peculiarity of the marital bed, which could be separated when the Jewish woman had her period or had given birth, hence was “unclean,” and pushed together again after she had bathed in the mikveh. He showed us the special dishes for meat and dairy, and the sabbath dishes. All very strange and exotic…

He was funny and charming, with a gleam in his eye and a spring in his step. And, finally, as we were leaving, I had to ask: “So, are you Jewish?”

He grinned, pointed at his watch, and said: “Till six o’clock!” 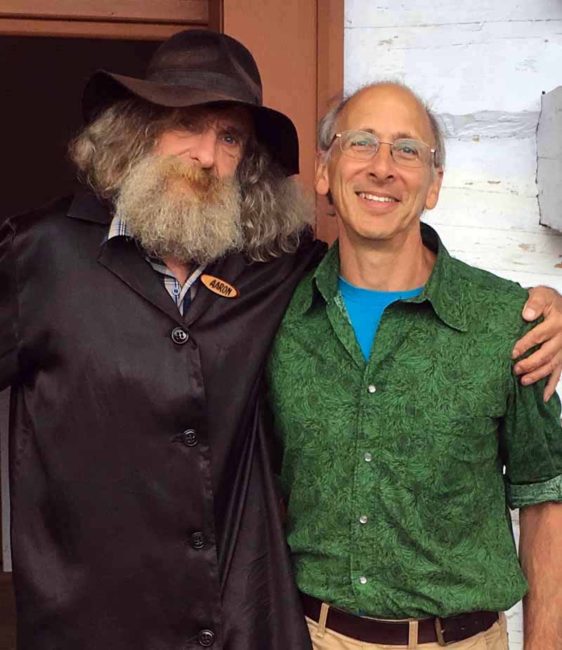