From London, Rob and I took the ferry to France, then hitchhiked down the coast to Spain. It was slow going with two young men together, and in Zaragoza we gave up on that tactic and made our separate ways to Málaga — my way started with a driver who made a pass at me, then dumped me in the middle of the desert, where fantasies of dying of thirst were finally ended with a nice ride with a family en route to Madrid, where I spent a couple of days busking in the metro and got enough money to take a night train south.

By the time I reached Málaga I was in love with Spain, so I got a cheap apartment and enrolled in language school. Rob took a detour north, hoping to run away to sea, returned a month later after sundry adventures that belong in his memoir, and we buckled down to learning Spanish and got a job playing every other night in a bar in Torremolinos. It was called Maggie’s Farm, owned by an American biker named Bernie who worked doing underwater demolition in the North Sea during the summer and had used his savings to buy the bar for his English wife, Maggie.

Spain is famously guitar country, and that winter included my first desultory attempts to pick up some classical and flamenco techniques. In later years these would involve learning a couple of pieces by Bach and a couple more by John Renbourn, none of which I remember, and an abortive attempt to trade blues guitar lessons for flamenco lessons, in which I learned just how terrifically skilled even a fairly good flamenco guitarist is, especially compared to me.

That first winter, my attempts centered on a book with some basic flamenco rhythms, directions on how to play a rasgueado, and some simple semi-classical pieces, of which I retain only “Romance.”

I learned this because it was easy, and continued to perform it for the next few years for reasons arising from that fact — as “Spanish Fandango” became ubiquitous in the American South, “Romance” was ubiquitous in much of Europe, because even a novice guitarist could make it sound pretty. In particular, several generations of French teenagers embraced it as their cultural equivalent to “Stairway to Heaven” or “Blackbird” — it was the tune a sensitive, somewhat long-haired boy would play for a small circle of misty-eyed girls. (My wife, a French-American of the right generation, is so sick of this song that she flees the room if I even hint at playing it.)

Like “Spanish Fandango,” this seems to have been composed as a beginner exercise sometime in the 19th century, perhaps by a Spanish guitarist named Antono Rubira. It was first recorded by another Spanish guitarist, Simon Ramírez, on a wax cylinder around 1900, and published and recorded several times over the next few decades. 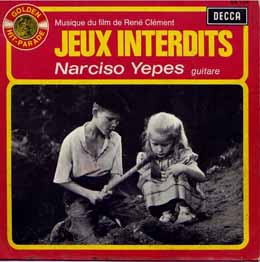 which would be quite believable were it not for the earlier recording and manuscripts. In 1952 Yepes’s recording of the piece was the theme to René Clément’s film Jeux Interdits (Forbidden Games), which was an international success, hence the name by which it is known in France and generally throughout Northern Europe.

If you want to know more, there is plenty on Wikipedia and elsewhere, because lyrics were composed to it, and it was sung by everyone from Mireille Mathieu to Miriam Makeba to Tom Jones, and played by everyone from Yepes to Eddie Vedder to  Rob, who watched me play it a couple of times, then borrowed my guitar and played the first section back at me, though he didn’t play guitar — like they say, it ain’t brain surgery. (Though, God knows, Yepes played it a lot less clunkily than I do.)

Revisiting the songs that have made a home in my head

Elijah Wald's website has numerous pages about his books and other writing, various musical projects, his biography, an archive of old articles, and other heterogeneous ephemera.